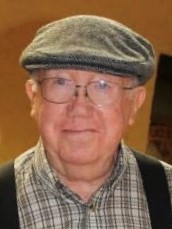 On Friday, July 24, 2020, James Gilbert Adams, 86, passed away peacefully at his home in Red Hill, Georgia. He was a loving husband, father, grandfather, brother, and friend. He was known as Gib and Mr. Adams, but his grandchildren called him JG.

Gib served as an Air Force mechanic from January 23

, 1956. After attending school at Reinhardt College and the University of Georgia, he graduated with a B.S. in Education. He retired from the Franklin County Board of Education after teaching for 36 years in Forsyth, Cherokee, and Franklin Counties. He coached middle school sports and Little League baseball for a number of years.

He was an avid fox and rabbit hunter, loved working in his garden, and loved listening to the old country classics. He was a member of Allens Methodist Church and attended Compassion Baptist Church. He taught Sunday school for a number of years and served as a Sunday school superintendent.

He is survived by his wife of 54 years Brenda Stowe Adams, his son Mark Adams, his daughter and son-in-law Andrea Adams and Michael LaCount, and two grandchildren Michaela Elaine LaCount and McKenzie Georgia LaCount; all of Red Hill, Georgia. He is also survived by many nieces and nephews.

Flowers are optional. Those desiring may make memorial donations to the Allens United Methodist Church Cemetery Fund or to Compassion Baptist Church.

Services will be Monday afternoon at 2pm at the B D Ginn Memorial Chapel with Rev. Leon Carson.  Interment will be at Allens United Methodist Church with Rev. Robby Hill.

the family will receive friends from 2 until 7pm Sunday afternoon at the Ginn Funeral Home.  During the visitation and service we respectively ask that friends please observe guidelines established during this time.

To order memorial trees or send flowers to the family in memory of James "Gib" Adams, please visit our flower store.