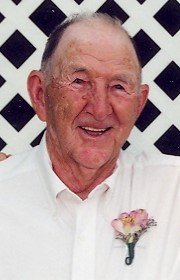 Born January 17, 1925, in Clarkesville, GA, he was the son of the late Ernie and Omie Robinson Nix.  He was the husband of the late Oria Lucille Pitts Nix; father of the late Bobbie Jo Nix, Johnny Lee Nix and James Nix; grandfather of the late Jeremiah Nix, Sherry Denise Garrison, and Joey Shane Garrison; and brother of the late Lloyd Nix, Gordon Nix, LT Palmer, Freida McNabb, and Dollie Nix.  He was a carpenter and brick mason and had worked at Bowen & Watson Construction for 54 years. He served in the U S Army during World War II. He was a member of the Union Ground Christian Church.

Services will be Tuesday at 12 noon at the B D Ginn Memorial Chapel with the Rev. Donald Phillips. Interment in Double Churches Cemetery.

The body is at the Ginn Funeral Home. The family will be at the home of his daughter, Betty Bland, Carnesville, and will receive friends from 6 until 8pm Monday evening at the funeral home.

To order memorial trees or send flowers to the family in memory of Hubert Nix, please visit our flower store.