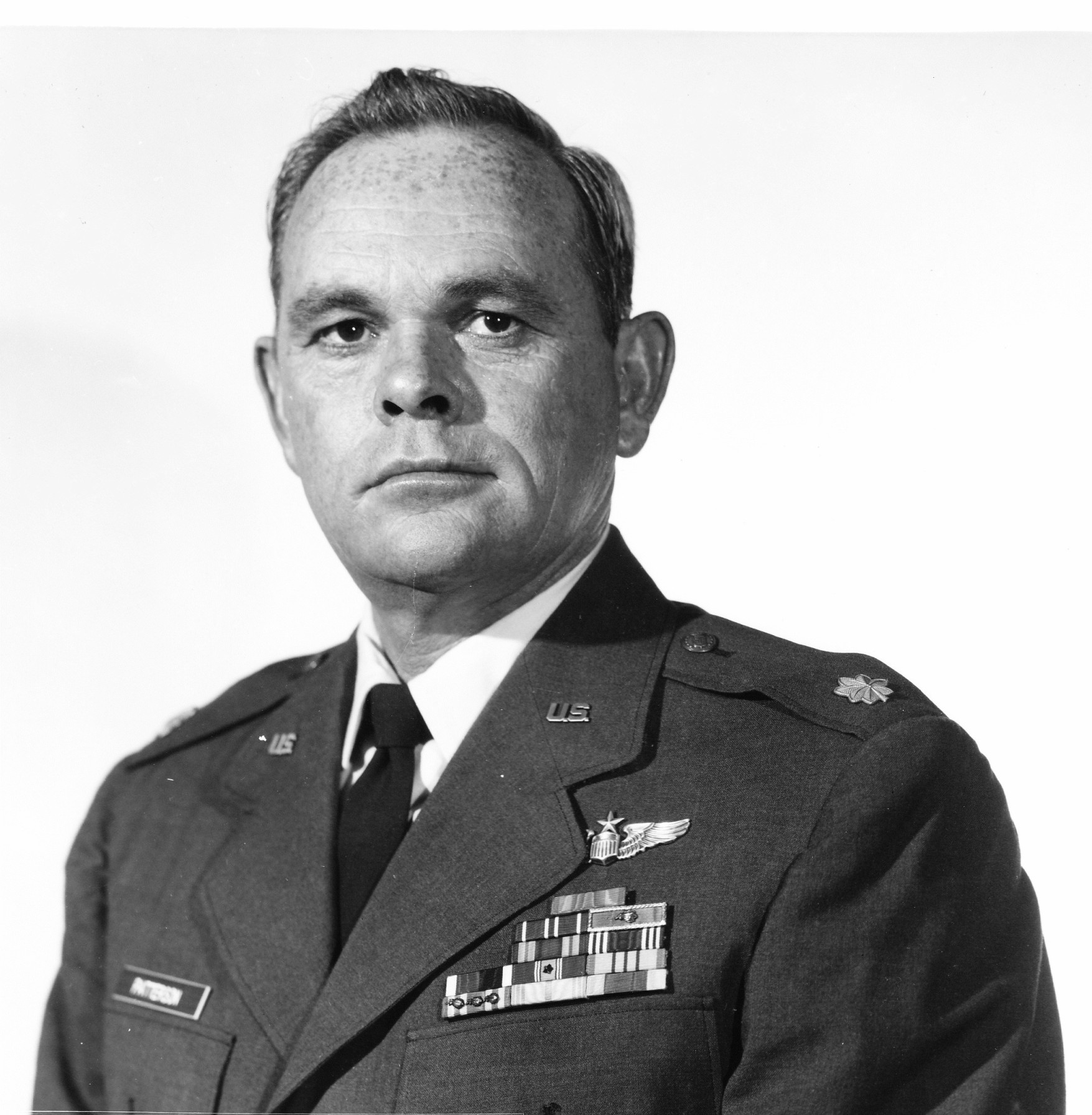 
Grayson Marion “Pat” Patterson age 90 passed away on the morning of January 5, 2019 in Dacula, GA. He was born in Carnesville, Georgia during the spring of 1928 and was a graduate of Franklin County High School, Class of 1945. Pat met his future wife Joan Bernhardt on a trip to Chicago. They quickly fell in love and married in 1948.
Pat’s military career started when he enlisted in the Army in 1945 at age 17. He served in the US Constabulary based in Germany at the end of WWII. He re-enlisted in the Army Air Corps and attended the University of Arizona. He was then commissioned as a 2nd Lt and went to active duty and pilot training. His first assignment was at Sculthorpe AFB in England where he flew the first four- engine jet bomber, the B-45, during the Cold War. In 1957 he was reassigned to Arkansas and flew tactical bombers. This was his favorite assignment and aircraft. He was reassigned to SAC command and learned to fly the KC-97 in Texas and then moved to Forbes AFB in Topeka, Kansas. Finally, the KC-135 and B-52 became available and Pat went to KC-135 training and flew that plane for approximately 10 years. During that time, he was assigned to Turner AFB in Albany, GA and McCoy AFB in Orlando, FL. He was also assigned to temporary duty in Southeast Asia on three six-month tours in Japan, Thailand and Taipei where he made several 10-day trips crossing the Pacific Ocean escorting and re-fueling tactical fighters and bombers. Pat’s last tour to Southeast Asia was in December of 1969. He was able to make his way to visit his son Dennis who was serving as a helicopter pilot in Vietnam. He had a "TDY" training mission with the US Army's 61 Assault Helicopter Company in RVN. He was able to fly two combat missions with his son and accrued seven combat flight hours during this time. It was a Christmas to remember as they flew UH-1H and UH-1B Hueys together during that 1969 visit. Pat rose through the ranks and retired as a Major in the USAF in 1970. He was a true patriot who often spoke of his great experiences flying and associating with the excellent members of the armed services. He always said, “I would gladly do it again, if only I could.” After 23 years in the military, Pat traded flying a plane for the USAF to driving an 18-wheeler for Frito Lay till the mid-1980s. He loved the people he met and the scenery he saw on every trip he made. It was the perfect second career…instead of piloting the skies, he was piloting the roads! Pat and Joan lived in Doraville and Oakwood, GA, Santee, SC then back to Georgia. His wife Joan passed in 2011. After a while, Pat moved to Suwanee, GA and met some wonderful friends including a special group of female dinner companions who referred to themselves as Pat’s Harem. Did I mention our dad was a bit of a flirt! I am sure mom got a big kick out of this up in Heaven. She always said that wherever they went, the ladies always made a bee-line to your father, and she sure was right!
As “things” started happening a few years later, our dad would say, I think it is time to go to assisted living. Luckily, we found a beautiful place in Dacula, GA. Pat lived at Arbor Terrace for the past two and a half years and was well cared for and loved by the staff. He was always a gentleman, always had a smile on his face and a twinkle in his eye. And, as you guessed, dad found another special friend at Arbor. I will never forget watching them toodle along with their walkers after dinner to Aldi’s to stock up on necessities! I am sure Mom was just shaking her head and laughing saying that’s your father! Pat was on palliative care with Agape Hospice this past year due to that dastardly dementia plus a few other of the ailments of aging. Their nurses and CNAs cared for him with lots of love and expertise. Agape’s chaplain, social workers and volunteers would come by on a regular basis to visit Dad as well. Pat’s family caregiver visited him a few days a week as a companion to keep him company or go with him to activities, only if he agreed of course! Whenever he spoke of his caregivers, he always said he was one lucky man! The last week or so Pat was also blessed with the help and care of the wonderful CNAs at Amada Senior Care. They were all so loving and kind. The last few days turned to constant comfort care. I cannot say enough to express my family’s gratitude to those who were at his bedside 24/7. They were like Pat’s own person guardian angels. His passing was just as he had hoped, calm and peaceful. Finally, Pat’s escort to the funeral home included the most beautiful flag ceremony, it brought tears to all our eyes.
Pat was preceded in death by his parents Robert and Beatrice Patterson of Carnesville, GA; brothers Claude Patterson; Bob Patterson and Marvin Patterson; sisters Inez Verner, Cleo “Pat” Ryan and Arlie Vaughan. He is survived by his sister Margaret Patterson.
Pat is also preceded in death by his beloved wife Joan Bernhardt Patterson of Chicago, IL. He is survived by his four children; Dennis Patterson of Ft. Pierce, FL; Marikay Harris of Santee, SC; Lisa Smith of Dacula, GA and John Patterson of Atlanta, GA; three granddaughters, two grandsons and three great-granddaughters and many cherished cousins, nephews and nieces.
Pat’s final flight will take off from Indian Creek Baptist Church in Carnesville, GA, 11am Saturday morning, March 16, 2019. in the meantime, he will be circling the area hosting some heavenly flights and perhaps even buzzing Carnesville one last time!

To order memorial trees or send flowers to the family in memory of Grayson Patterson, please visit our flower store.