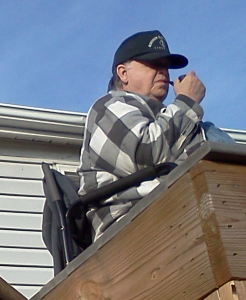 Frank Eugene Coile Sr. 69, of the Nail’s Creek Community passed away Tuesday evening, April 10, 2012, at the BJC Hospital in Commerce, GA Born January 7, 1943, in Atlanta, GA, he was the son of the late Luther Eugene and Alice Mae Grizzard Coile. He was also predeceased by a son-in-law, Gregory Eggleton. He and his wife Brenda “The Ruth’s Candies Lady” were married September 13, 1964. Before retirement, he was a commercial electrician and member of the IBEW Local 613, and a firefighter with the DeKalb County Fire Department. He attended Georgia Tech, was a veteran of the United States Navy and was a member of Redemption Outreach Ministries in Homer, Georgia. Survivors include his wife, Brenda Whatley Coile, one son and daughter-in-law, Frank E. and Holly Coile Jr, Carnesville, two daughters and son-in-law, Melissa Coile Eggleton, and Pamela and David Lee, both of Homer, GA; and three grandchildren, Brennan, Benjamin, and Breanna. Services will be Saturday morning at 11am at the B. D. Ginn Memorial Chapel of Ginn Funeral Home, Carnesville, GA, with the Rev. David Carithers. internment will be in the Nail’s Creek Baptist Church Cemetery. The body is at the Ginn Funeral Home, Carnesville. The families are at their homes. They will receive friends from 6 until 8pm Friday evening and 9 until 11am Saturday morning before the service.

To order memorial trees or send flowers to the family in memory of Frank E Coile Sr, please visit our flower store.