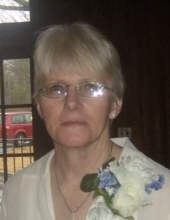 A daughter of the late Guy and Marie Ferris Sewell, she was born April 1, 1956 in Greenville, South Carolina having lived most of her life in Toccoa. She was employed with the Toccoa Nursing Center for a number of years and was a member of Highpoint Community Church. In addition to her parents, she was preceded in death

by a brother, Charles Sewell and by a sister, Linda Elrod.

Survivors include three daughters and sons-in-law, Christi Lawson and Nicole and Eric Shirley both of Toccoa and Carrie and Ryan Matthews of Martin; three sons and daughter-in-law, Timmy Lawson, David Lawson and Shane and Leah Lawson all of Toccoa; eight grandchildren and one great-grandchild; two brothers and sisters-in-law, John and Shirley Sewell of Toccoa and Ronny and Tanya Sewell of Star, South Carolina; two sisters and brothers-in-law, Shirley and David Moye of Pelham, Georgia and Donna and Frank Wigley of Toccoa; sister-in-law, Recca Sewell of Lavonia; brother-in-law, Rev. Aaron Elrod of Toccoa.

The family will be at t he home on W. Whitman Street and will receive friends at the Acree-Davis Funeral Home on Tuesday, 6 p.m. until 8 p.m. Online condolences may be left for the family at www.acree.davisfh.com.

Interment will follow in the Stephens Memorial Gardens with the Acree-Davis Funeral Home in charge of the arrangements for Mrs. Deborah Sewell Bowman.

To order memorial trees or send flowers to the family in memory of Deborah Sewell Bowman, please visit our flower store.