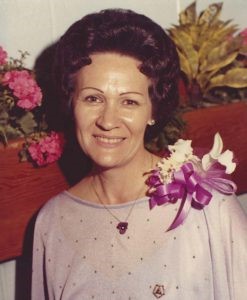 Born July 19, 1936, in Fort Valley Georgia, she was the daughter of the late
Paul Joshua and Agnes Gertrude Hutto Denton. She was the widow of the late Joe Willard Kesler.  She was the sister of the late Sue Denton Crunkleton; and niece Cindy Crunkleton Garrison. She was a graduate of Toccoa High School.  She was a Past Worthy Matron of Red Hill Eastern Star #417 and as Past Grand Adah for the Georgia Grand Chapter of the  Eastern Star.   She was a member of the Prospect United Methodist Church and Homer United Methodist Church.  She had served as Sunday School Teacher and Choir Director at Prospect.

Services will be 2pm Tuesday at the B D Ginn Memorial Chapel with Rev. Jim McClendon.  Burial will be in the Prospect United Methodist Church Cemetery.

The body is at the Ginn Funeral Home. The family is at the home. They will receive friends from 6 until 8pm Monday evening at the funeral home.

To order memorial trees or send flowers to the family in memory of Ann Kesler, please visit our flower store.